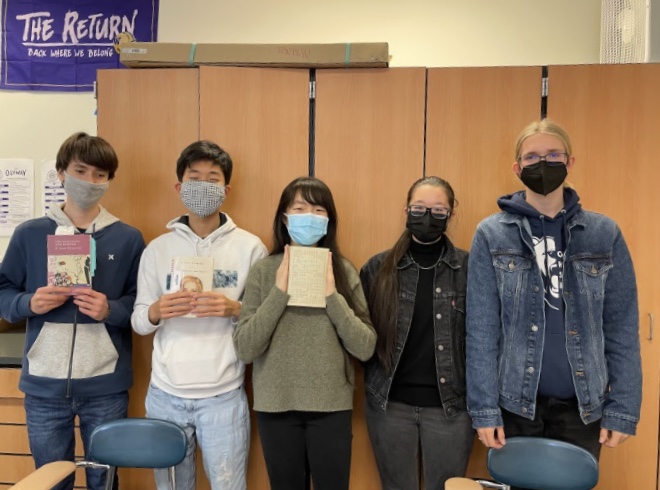 Members of the Classics Club meeting during Bear Time.

The pieces of literature that once stocked the shelves of the nineteenth and twentieth centuries have become a staple in the OHS Classic book Club. This club meets every Beartime for the entire period where they all decide on one book to read and discuss. It was all about the love for books that created this gathering.

Classic Club Administrator and Teacher Marianne Lang can remember when the club was founded. It started over online learning, about a year ago, when a couple of students agreed that they wanted to start this club. “I love that they organize everything, that it is their idea, and that they do everything on their own,” said Lang, expressing her happiness that the students play the main roles in the club. Lang thinks it is great that there are so many different clubs at OHS, and that this one just adds to the many little niche things that students are interested in, expressing how it also spreads awareness of what our culture was in the past and the educational value of the books. Lang hopes that they can have more students join the club “since the presidents are seniors and will graduate soon, it is a great time for students to get involved and can be a part of our community.”

One of the Club Presidents and Senior at OHS Annette Lu spoke heavily of her love of the discussions that they have, saying she loved the fact that they can all discuss something that they have in common, sharing their unique perspectives on the topic. The second Club President and Senior at OHS is Michael Zhao says “It holds a lot of secrets, the thoughts and philosophy of previous writers,” Zhao stated when talking about the books the club had read. Zhao added that he also loves seeing new faces turn up to the club when they do, and he would love to see new members join, having around six and hoping to grow. Zhao made it clear, too, that “none of this would be possible without Ms. Lang.”

Even though the Classics Club has only been around for a couple of years, it has seen growth in the number of students attending. The Classics Club supports a very strong community and holds their meetings every Beartime for the entire hour. No matter what genre, book length, or difficulty, the Classics Club will keep on reading.