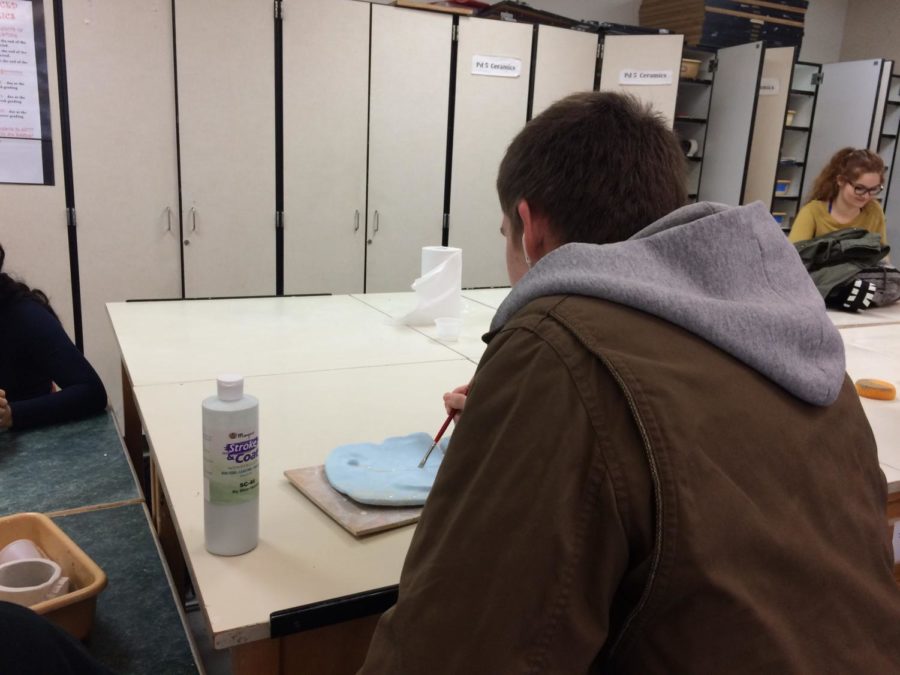 Glass studio is not your everyday OHS art class. If it were, every art class would involve torches, liquid glass, and preferably safety glasses.

Glass studio involves a large variety of projects and art styles, from melting glass into beads and marbles, to slicing in into exquisite stained glass art. It fills a fine art credit, occupational education, or elective. Each project builds upon skills learned in the last one, such as lighting a torch correctly and cutting glass precisely. The students learn something new with every project. Glass studio teacher, Mrs. Mann says, “We start with something basic that I know you’re gonna screw up, and then work up from there.” She loves teaching projects that involves torches and fire, such as making marbles. Mrs. Mann has at Olympia High School for eighteen years, and glass studio for two. Before glass studio, she taught photography. She has been working with glass for about fifteen years, and enjoys teaching it. While working with glass can be very fun and rewarding, mistakes happen frequently. Senior Georgia Leib, a TA in glass studio says, “just a tiny difference of movement can finish or ruin a project you have been working on for sometimes days.” It’s very easy to melt a bead too much and have it misshapen beyond repair, or get it stuck to the mandril. Cutting glass also has its difficulties, was it can break or snap in places not intended. Often times marbles will drop onto the ground while still hot and not completely finished, and start rolling around the classroom causing a chaotic scene Mrs. Mann calls, “marble rodeo”.

Leib has been working with glass for about six years, but this is only her second year in the class, since the highschool only began offering it last year. Leib says, “I love glass studio because it allows me to show my artistic abilities other than my usual like leatherwork and painting.” She’s taken many art classes, her favorites including glass studio and leatherwork. She enjoys making glass roses, something she begged Mrs. Mann to let her attempt last year ahead of time. Her duties as a TA involve helping Mrs Mann unload and load the kilns used for melting glass, setting up soldering irons, and other smaller glass studio necessities. Leib would suggest that anyone should try the class, regardless of prior art or glass experience, on the chance of falling in love with it. She says, “This year we have what I like to call ‘glass with sass’, where I have some of my closest girlfriends in the same class and we gossip and talk about our lives while we work on our projects. I’ve cut my hand open six times in one day and burned my hand twice, it’s never fun but the payoff is so much better.” Junior, Emily Ferguson says, “If a friend has an open class, I would highly recommend taking glass studio. It’s a fun class that’s not stressful and a it’s a good break from the common courses.” Ferguson loves glass studio for its versatility. Her favorite project has been making night lights, but she also enjoys making marbles and beads.