I Have no Mouth and I must Scream: A Dystopian Mouthful 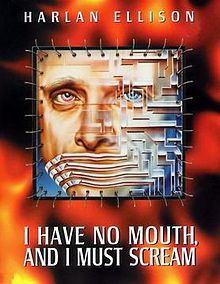 You know, with a name as edgy as “I have no mouth and I must scream” you’d think it was some poem you wrote in seventh grade when you were a misanthropic knowitall. And you be wrong, it’s actually Harlan Ellison’s award winning short story I Have No Mouth and I Must Scream. Written in 1967 and published in a March issue of IF: Worlds of Science Fiction, the short story won a Hugo award in 1968 and was published in 1967 as a book along with a few other short stories. With a name as extra as that, I had a curiosity to read it. And I found that the first read offered and emotional response, but not a lasting impact on me personally. I’ve never been into Sci-Fi, and it’s hard to say whether this is even Sci-Fi to begin with. I think that the story is a really cathartic and thrilling first time read experience, but I will tell you that I probably won’t be rereading it. I think the book kinda loses its thrill after a few times.

A quick notice however: The book has some content which some may interpret as misogynistic, homophobic and racist. It really depends on what one may interpret as the adjectives listed above, but just so you know: This story does contain violence, both sexual and physical, towards women, as well as the erasure of a homosexual identity of a character, so if that is something that bothers you, it maybe for the best not to read it. It’s really up to interpretation of the events; it can be argued that it’s more of a general hatred for man, but this story has had some backlash from online reviews on sites like goodreads.com, where some users complained of the book’s contents.  An online reviewer named Melissa gave it 1 star and commented “Wow. This book might’ve been pretty good if it hadn’t been so misogynistic.” She later edited her statement after a year and doubled-down on her opinion “Each intriguing premise gets buried under all the hatred towards women. Yuck…I’m actually kind of astounded that so many people seem to find this to be such an amazing story since I found it to be really dated & flat.”.

People’s opinions on the book seem to be a bit divisive. Another reviewer named Simon gave it five stars, saying “Ellison’s approach is to shock and to provoke a reaction in the reader…Some will definitely find him too harsh or negative to enjoy his work but I think there is an elegance to his prose and wonderfully evocative imagery.”

Personally, I listened to the audiobook, and as someone who is not all too sensitive to scary or disturbing content, I didn’t pay a lot of the negativity any mind; it just added more the the atmosphere of the setting for me. I understand where certain things may have crossed the line for some people, but it wasn’t enough to ruin the experience for me. Before the journey starts, you get a series of monologues, describing the setting and the characters, by the narrator, who’s sporadic stream of consciousness acts not only as the point of view through the story, but offers you an insight into the character himself. The prose is very abrupt, as the stream of consciousness point of view shows us that seemingly the only way to stay sane in a world this dark and bleak is to lose it entirely. The descriptions of this bizarre and crumbling world are intricate and articulate.